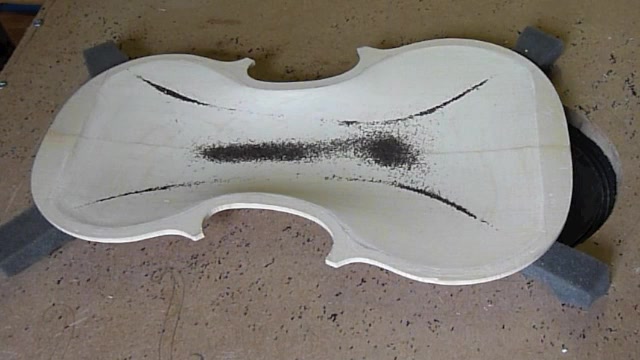 Now that both plates are at nominal dimensions, it is time to “tune” them. I get a lot of emails asking about my plate tuning methods. I’ll try to highlight the major points.

The goal is to slowly remove wood in the right areas in order to allow the plates to vibrate freely. At the same time, you don’t want to remove so much wood that the resulting instrument will lack power and projection. The question then becomes, where are the right areas and how do you tell when to stop? It is said that in Stradivari’s time the plates were tapped with a knuckle until they produced the right sound. I do this myself. As wood is removed the sound changes from a dull thud to a clear ring. It tells you when to stop but not where to remove wood. It is also said that they used some combination of back lighting and flex to reveal stiff parts of the plates. That may well be. I guess we will never know.

Since the time of Chladni and Helmhotz, a lot of research has been done on the resonant frequencies of violin plates. Most notably by Carleen Hutchins. Jonathon Rowe has a dedicated site that will tell you more than you would ever want to know about the history and the various theories on plate tuning. What I do is a variation of the theme.

There are many resonant modes of a violin plate. Carleen identified three (f5, f2 and f1) as the most important ones. She gave a target for f5 and indicated that f2 and f1 should be octaves of that. Personally I have never found f1 to be particularly useful. Also, I have never gotten f5 to be an octave above f2 (the ratio is more like 2.1 to 2.3). I suspect this has a lot to do with the arching I use for my plates. I find f5 to be the most useful and it guides most of my tuning activities.

So, what I do is weigh the plate. I then place it over a fixture I made that has a speaker connected to an amplifier and a signal generator. I sprinkle the plate with tea leaves and find the f5 and f2 resonant frequencies (play the videos below to see the resulting patterns formed). The shape of the patterns tells me where local areas of stiffness are on the plate. How lively the leaves bounce on the plate, the range of frequencies around the resonance and the weight of the plate tell me when to stop removing wood. For example, as I approach the optimum thickness I find that f2 will only vibrate the leaves within a couple Hertz of the resonant frequency and f5 generally within 3 to 5 Hertz.

It has been suggested that f5 on the top plate should be half a tone below f5 for the back. It has been my experience that a top that is at or just below the back produces good instruments. If it gets too much above, not so much.

Below are two videos of f5 and f2 that I took of the finished top plate for “The Terry”.